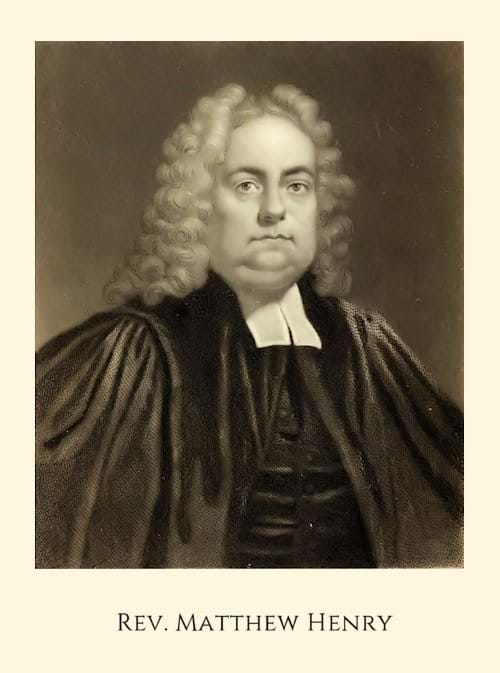 Matthew Henry (18 October 1662 – 22 June 1714) was a nonconformist minister and author, born in Wales but spending much of his life in England. He is best known for the six-volume biblical commentary Exposition of the Old and New Testaments.

Matthew Henry was the second son born to Philip and Kathrine Henry. He was born prematurely at his mother's family home, Broad Oak, a farmhouse on the borders of Flintshire and Shropshire. He was baptized the next day by the local parish rector. His father, Philip Henry, a Church of England cleric, had just been ejected under the Act of Uniformity 1662. Unlike most of his fellow-sufferers, Philip possessed some private means, and was able to give his son a good education. Henry's sister was diarist Sarah Savage.

By the age of nine, Henry was able to write Latin and read part of the Greek new testament. He was tutored in grammar by William Turner in 1668 who was temporarily staying at Broad Oak. His father provided much of Henry's early education at home. In 1680, at eighteen, his father sent him to a school in Islington, London to be tutored by the nonconformist minster Thomas Doolittle. Henry later transferred to Gray's Inn, in the heart of the capital, to study law. He soon gave up his legal studies for theology, and in 1687 became minister of a Presbyterian congregation at Chester. While in Chester, Henry founded the Presbyterian Chapel in Trinity Street.

After moving to Chester, he married Kathrine Hardware on July 19, 1687, after her mother initially objected to the marriage. Kathrine Hardware's parents then moved to Chester and Henry and his wife boarded with them. On February 14, 1889 Kathrine died of small pox shortly after the birth of their first child. He named her Kathrine after the mother, but the infant died 15 months later. He continued to live with the Hardware's after the death of his wife and continued his ministerial duties.

He moved again in 1712 to Mare Street, Hackney. Two years later, on 22 June 1714, he died suddenly of apoplexy at the Queen's Aid House (41 High Street) in Nantwich, while on a journey from Chester to London.

Henry's well-known six-volume Exposition of the Old and New Testaments (1708–10) or Complete Commentary, provides an exhaustive verse-by-verse study of the Bible, covering the whole of the Old Testament, and the Gospels and Acts in the New Testament. After the author's death, the sixth volume (Romans through Revelation) was finished by thirteen other nonconformist ministers, partly based upon notes taken by Henry's hearers. The entire Commentary was re-edited by George Burder and John Hughes in 1811.

Henry's commentaries are primarily exegetical, dealing with the scripture text as presented, with his prime intention being explanation, for practical and devotional purposes. While not being a work of textual research, for which Henry recommended Matthew Poole's Synopsis Criticorum, Henry's Exposition gives the result of a critical account of the original as of his time, with practical application. It was considered sensible and stylish, a commentary for devotional purposes.

Famous evangelical Protestant preachers such as George Whitefield and Charles Spurgeon used and heartily commended the work, with Whitefield reading it through four times – the last time on his knees. Spurgeon stated, "Every minister ought to read it entirely and carefully through once at least." John Wesley, who himself published an abbreviated edition of the Commentary, wrote of Henry:

He is allowed by all competent judges, to have been a person of strong understanding, of various learning, of solid piety, and much experience in the ways of God. And his exposition is generally clear and intelligible, the thoughts being expressed in plain words: It is also found, agreeable to the tenor of scripture, and to the analogy of faith. It is frequently full, giving a sufficient explication of the passages which require explaining. It is in many parts deep, penetrating farther into the inspired writings than most other comments do. It does not entertain us with vain speculations, but is practical throughout: and usually spiritual too teaching us how to worship God, not in form only, but in spirit and in truth.

Several abbreviated editions of the Commentary were published in the twentieth century; more recently the Christian linguist and author of reference books, Martin H. Manser, edited a version in modern English: The New Matthew Henry Commentary: The Classic Work with Updated Language.